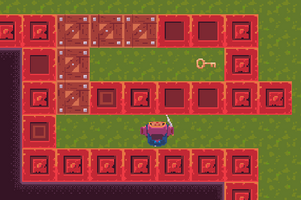 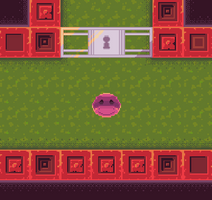 Hey! Won't Look Back just got a small update that fixes up most bugs that were present in the jam version. It also adds a few rooms to craft a better difficulty curve, to hopefully prevent keyboards smashing over tricky rooms.

However, if you want to experience what was the version we made for the jam, you still can! But I only recommend that option if you're playing this to see what was made in 48 hours, because really, the changes made in the new version are just there for you to have a better experience, they're not removing any key feature or changing anything major.

Now the thing is, while this is the "final" update and this is just a bug fix, we're actually gonna work on a deluxe edition where it's an actual game longer than 10 minutes with branching paths, secrets, more worlds, actual bosses, more mechanics and even new items that you will be able to get on your way, that is if you pay close attention! We're working on thinking of a way to add health that you lose upon getting hit/resetted. But we don't want to make you restart from the start/a saving stone if you die, that would ruin the intent of "not looking back" and to be honest, wouldn't be fun. So yeah, what we do if we add health when the player dies that doesn't make you go back? Well, we'll see!

Hoping that you will be interested in checking out the deluxe version when it's out, for now, thanks for all the support on the jam version! :)

Get Won't Look Back